GHOST STORIES of the New West: From Geronimo’s Boots to Einsteins’ Brain, 2010 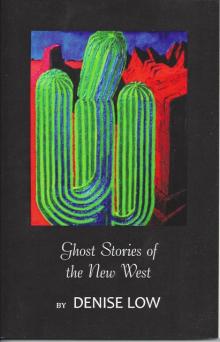 Rain Taxi : “Former Kansas Poet Laureate Denise Low is a poet, editor, publisher, professor, and ghost hunter. Though this last fact may not be widely known outside Kansas—nor is it necessarily the opinion of the author herself—sufficient evidence exists inside the 126 pages of her latest offering,Ghost Stories of the New West. Filled with vivid imagery of the land and the culture, and both verse and prose, the book is an enchanting tribute to the plains and the history long buried there beneath the bluestem that grows wild. Low, who is of partial Lenape and Tsalagi (Cherokee) descent, freely applies more than just a smattering of Native American knowledge throughout the book. Surgical with the familiar and charming with the ancient, she uses every word to remind us of what has never been truer: it is the land, as much as the people who once inhabited it, that shapes this country. Ghost Stories zooms in on 200 years of time-lapse and brings into focus the Great Plains and its wondrous people. From the Shawnee prophet Tenskwatawa in “A Mound Builder’s Geography,” to the great Lawrence, Kansas writer in “I Still See The Ghost Of Langston Hughes,” Ghost Stories brims with emotion for the plains and its people. At times it rolls like water from a swollen river after an April thunderstorm, as in “On Thompson River,” when the speaker recalls: “We make love at dawn with / tumbling water / our witness.” Then there are colder, dryer moments that leave you feeling wind-burned, as when “Geronimo’s Boots Leave Town” recalls “The time he slipped off a mountain / when surrounded by the army / The time he shapeshifted / so another man’s face appeared / The time he cut off one wife’s nose / for fooling around.” The book wouldn’t be complete, however, without the more personal poems in the collection, evoking intimate details with which even the most distant of foreigners can empathize. The recollection of a familial heirloom in “Our Grandfather’s Turquoise Ring” could be the impetus to remember what is sacred, and how sometimes that’s a quality formed over time, like a jewel. Perhaps the most resonant poem in the collection is “The Haunted Secretaire,” a chronicle of how an antique writing desk survived through the years, neglected behind boxes in garages, mold gathering on its wood surface, until it was restored and relocated to a place where it could finally blend in. “Secretaire” is a poem about searching and belonging. It’s no wonder Low placed it at the end of her collection, to bid her readers farewell, for what is a ghost if not a thing that no longer belongs anywhere? When that writing desk, newly polished and dried, finally finds a home, it’s a way of saying, “Be haunted, and then be alive.” Heath Fisher

Flint Hills Review: “In a smooth mixture of poetry and prose, Denise Low explores European and Native approaches towards ghosts, pondering the past and the present, life and the afterlife—and the land to which we are all held.”Kevin Rabas

Kansas City Star: “Let Denise Low, a former Kansas poet laureate (2007-2009), tell you tales of the Great Plains with her recent book “Ghost Stories of the New West” (Woodley Memorial Press; $12). Her poems take readers through the natural tapestries and landscapes that we Midwesterners are lucky to have.  With the poem “Trailhead,” we observe the plight of travelers on the Oregon Trail: “Watch for travelers/ who risk what they have/ for what might happen.”  Read “On Thompson River” or “Flint Hills Twilight” to the one you love and let their vision of this land and the hopes that endure within it resonate.” Noah Homola, Feb. 12, 2011

Gently Read Literature:   Sept. 2011″‘Midwestern poet’ can be a dismissive term, a phrase that implies the poet’s content is unremarkable, the style pedestrian, the voice unauthoritative, and the form lacking experimentation or coherence. None of these assumptions are true about Denise Low’s new book, Ghost Stories of the New West. Low, who was the Poet Laureate of Kansas from 2007 to 2009 and is the current president of the Association of writers and Writing Programs, has published over twenty books, including ten collections of poetry. With self-effacing Midwestern grace, Low used her years as poet laureate to promote the work of other Kansas poets, as evidence d in her blog, but her own work is highly deserving of a close reading.In Ghost Stories of the New West, Low explores her personal and geographic history. The first poem of the book, “For the Maiden Aunts and Bachelor Uncles,” calls out a detailed list of her five generations of Kansas relatives, outlining the contradictions within her bloodline. “For an uncle called Big Miller/killed by Lenape Indians in Ohio. /For the Lenape uncles killed by Big Miller.” The poem sets up one of the main conflicts in the book, Low’s mixed heritage: “For sunken burials on grassy hillsides. Dawn brightness erases chiseled numbers/and flourishes of white marble roses.” In a straight-ahead tone, this poem introduces the book’s bright light that shines on the “new” west’s forgotten natural treasures and Low’s half-hidden past. Low, who has worked at Haskell Indian Nations University for many years, is keenly sensitive to cultural nuances as she explores her heritage in these poems. She is careful not to declare herself a Native American, but instead builds to a common truth we all carry the conflicting history of our ancestors within our genes. Though her previous writing has included tributes to the Flint Hills and her mother’s garden, this thoughtfully structured book tells the stories of the people as well as the land in the first section, the poet ruminates about her life and past; the second section explores the ghosts of the new west, including a diversity of historical and literary figures, such as Walt Whitman, General Custer, Geronimo, and Langston Hughes. The third section highlights the landscape: canyons, grasslands, gardens, wetlands, lakes, and skies. The fourth section returns to the speaker, starting with the poem “My Diaspora,” which starts, “Look I might appear to be one small woman/but I embody a genealogy of opposing soldiers” and ending with a prose piece entitled “The Haunted Secretaire,” which concludes that a hand-me-down piece of furniture is “another member of the family/just moving at a slower pace. /The history continues.” As in Low’s earlier work such as Spring Geese and Other Poems (1984), birds figure strongly in this book as ghosts, healers, and indigenous members of the landscape. These poems include “trumpeter Swan: Photograph,” “Cormorants on Clinton Lake,” “Downy Woodpeckers,” and “Red Tailed Hawk: Medicine Bundle,” in which birds are compared to people: “We make the same magic/with blood and breath of others’ lives.” Geese in particular hold the mystical ability to negotiate between worlds in “Dreams of Geese,” a friend who is dying of breast cancer sees geese over and over again “Composed in the same loose wedges or alone, they move between life and death.” In the poem “Faith,” geese seem immortal outracing the coming death of night: “The ensemble of geese overheard/strains, forthright necks stretched/into the sun. They are black motes/showing no doubts, paddling wind/outracing a sleety bank of night.” Unlike human, whose conflicts leave ugly history and conflicting genetics, birds ascend earthly problems.             Low’s words are straightforward and clear, observant and detailed. She will often braid two ideas or languages together in a poem. In “Cherokee Lessons,” She names edible animals—bullfrogs, crawdads, opossums, squirrels—and fruits—persimmons and mulberries—in Cherokee to conclude: “I eat the seeded sweetness and know this summer cosmos has words.” Language is one of the fruits of this land. As she did in her book Thailand Journal: Poems (2003), in in Ghost Stories of the New West, Low takes her reader on her travels, this time to Europe in “How I Disappeared in Paris”: “plunks of rain ran/until the walls lay against/boulevards. I myself drained/into la Seine until le sun/re-rose. The next demain/a barge floated through a ciel, non, a heaven of fog.” The naming of the land and its inhabitants in their indigenous languages unveils the beauty, bounty, and happiness within these unique places. One oddity of the book is its inclusion of prose pieces. Though the book announces itself as “stories” in its title and the short essays are endearing and consistent with the book’s themes, the shifts from poetry to prose could be jarring to a reader due to the changes in tone and density of language. As the book is fairly long for a poetry collection, the author might have considered publishing these personal essays elsewhere. Having received awards from the national endowment for the Humanities, Lannan Foundation, Poetry Society of America, and the Roberts Foundation, Low’s poetry has been lauded nationally. Accessible yet driven by a firm poetic style, this book I the work of an author in her prime: she controls both obvious motifs and subtle undercurrents, placing her personal experiences into a larger natural world. Low brings depth and history to her Midwest, proving that this book is worthy of an observant slow drive through its dusty back roads, not just a quick fly-over. Ghost Stories of the New West should make the Midwest proud. Kathryn Kysar

Kansas City Star (12 Feb. 2011) had this to say about Ghost Stories of the New West: “Let Denise Low, a former Kansas poet laureate (2007-2009), tell you tales of the Great Plains with her recent book “Ghost Stories of the New West.”Her poems take readers through the natural tapestries and landscapes that we Midwesterners are lucky to have. With the poem “Trailhead,” we observe the plight of travelers on the Oregon Trail: “Watch for travelers/ who risk what they have/ for what might happen.” Read “On Thompson River” or “Flint Hills Twilight” to the one you love and let their vision of this land and the hopes that endure within it resonate.” Brian Burnes

Midwest Review of Books review: The west never truly died. “Ghost Stories of the New West” is a collection of poetry from Denise Low as she offers a thoughtful collection of poetry offering a deep and thought filled gaze into the history of the western United States and the people who came before her. Thoughtful and thought-provoking, “Ghost Stories of the New West” is not a collection to be overlooked. “Inside Her Belly: The Spine”: The creation story begins with fog./Oceans are the sky./Valleys are the dark voids.//The hero has delicate fish bones/connected to a lumpen head.//Or delicate fern-leaf vertebra/curl around uncertain middle continents./Or is this water snake’s spine/Or a limestone fossil’s–returning to life?” http://www.midwestbookreview.com/sbw/nov_10.htm

Manhattan Mercury: “It is difficult to imagine that anyone interested in the contemporary literature of Kansas isn’t aware of the work of Denise Low. Low, who lives in Lawrence and teaches at Haskell Indian Nations University is quite possibly the most widely known and published Kansas poet/writer living today. She has produced 20 books, edited several more and has won numerous awards for her writing. Low earned a PhD from the University of Kansas and an MFA from Wichita State University. She also served a two-year term as Kansas Poet Laureate from 2007 -2009. In an interview with Miranda Ericsson in 2008 that can be found on Washburn University’s literary web page, Low said, “Kansas has shaped my language. It has shaped my diurnal rhythms. It has shaped my sense of height and depth and spatial awareness. All these feed the writing.” Low is preeminently a writer of place and that place is Kansas. But in these pieces, place takes on dimensions not only of space and geography but also of history and heritage. Her work reflects much of Native American spiritual beliefs.” Elby Adamson